STRYKER’s story begins with Frederic Lawrence Ziegler, the youngest of 10 siblings and born in 1937 on the family farm in Appleton, Wisconsin. From the beginning, Fred was an independent soul, racing after his older brothers. They fondly recall him accidentally shooting a rifle in the kitchen, hitting the clock, and narrowly missing their mother as she prepared dinner. As he grew, it was clear that Fred wasn’t made for following rules—he was a risk-taker. 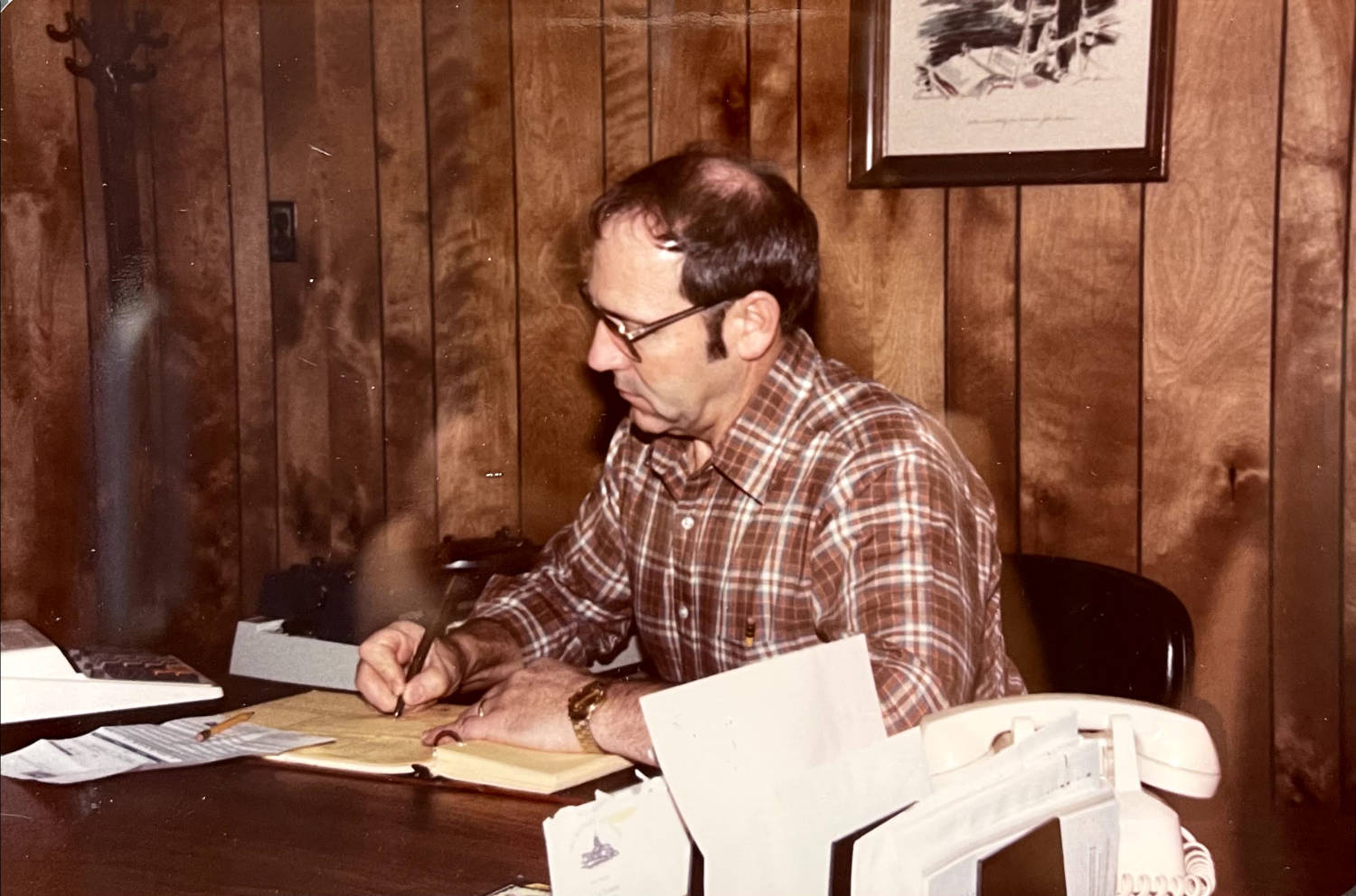 Fred married Donna Birkholz, who came from a family of strong-minded German entrepreneurs, in 1958. Her father, Roman, ran a successful wholesale cheese company and became an example to Fred, a mentor.

In 1960, through an unknown series of events, Roman came across a product called Metalphoto. The durable metal signage product was a new process of printing that cured an image into the metal itself, leading to a finished product that could last in harsh environments and outdoors for 30+ years. Upon this discovery, Roman shared Metalphoto with Fred who began producing signage in his basement on Marquette Street in Appleton. This is where STRYKER’s future began in the label industry.

1962 saw Fred and Donna welcoming their only child, Lynn. As the daughter of an aspiring entrepreneur, Lynn regularly found herself bonding with her dad during his 3 a.m. drives, delivering Metalphoto labels to companies before they opened for the day. She saw Fred’s dedication to growing the company long-term and how he would do whatever it took to get a job done. He sacrificed many nights, family weekends at the cottage, school activities – even his health – to serve his loyal customers. 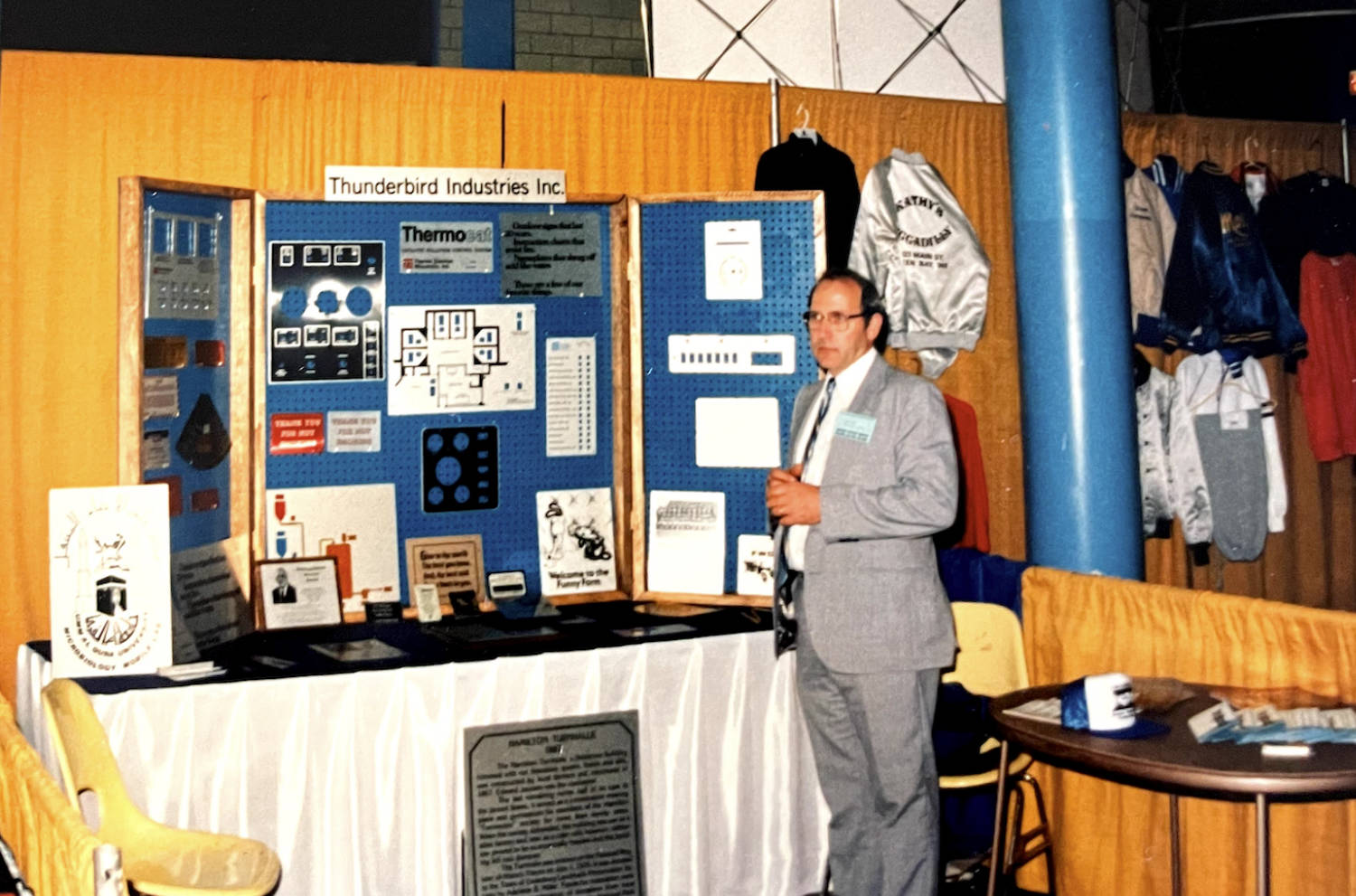 Fred Ziegler at the first tradeshow for Thunderbird Industries

By 1980, the business had outgrown the family basement, and the time had come to give it an official name and commercial location. Stemming from Fred’s love of Ford Thunderbirds, Thunderbird Industries was created and established at 230 E. Pacific Street in Appleton.

During the early years, Fred hired John Schuldes, a young man from the local newspaper in charge of putting together ads and layouts. His skill set made him an excellent fit. Joining Thunderbird Industries at just 20 years old, John is a foundational member of the work-family and has been a part of it for 38 years and counting. Fred himself expressed later in his life that “John was the best thing that ever happened to the company.”

Following the sudden passing of his wife, Donna, Fred went into early retirement in 2000. The opportunity to grow the business passed to his daughter, Lynn, and her husband. In 2001, Lynn renamed the business and dubbed it Industrial Nameplate Incorporated – a name that was well suited to the company’s capabilities. In 2005, based on similar printing abilities, Top Dog Screen Printing, Embroidery, and Design was created. Lynn’s career as president truly set the underlying tone for the company and how employees should be treated and valued, and that work should be fun, too. 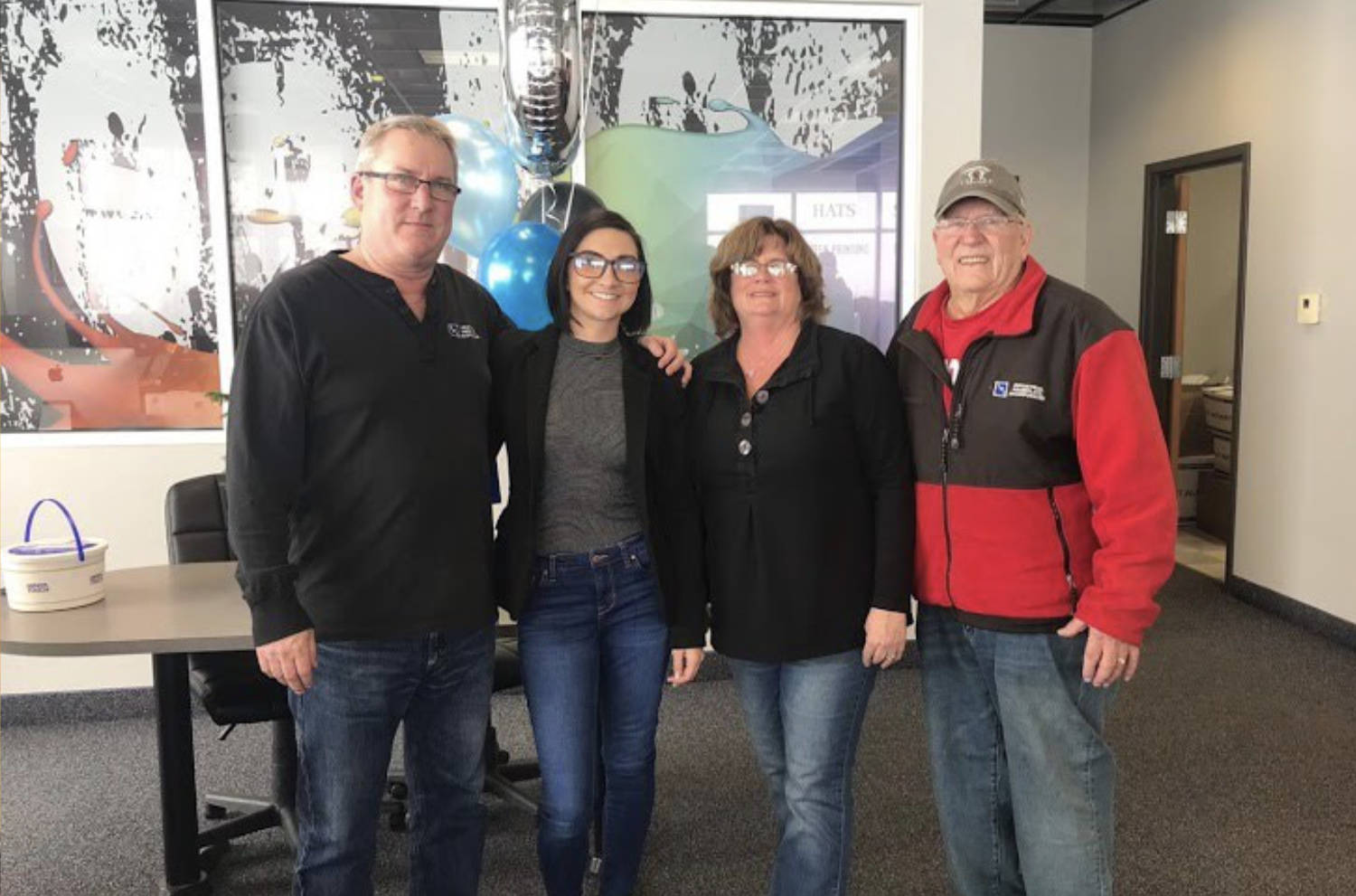 After graduating high school in 2007, Fred’s granddaughter, Nicole Swanton, joined the family business full-time. Between 2007 and 2014, she had the opportunity to explore different positions, mostly working where needed. As the company grew, the necessity for strategic growth and analysis was apparent, so in 2014, Nicole dove head-first into the newly created human resources director role. Here, she started the long, challenging journey of creating a scalable company for the future. This position saw the development of her hard-skills in creating a workforce, in addition to the continued formation of a work-family type of culture.

In 2020, the family and company were forced to say goodbye to Fred for the last time, which was virtually unbearable. It was a year of profound grief for many families, but also of profound gratefulness. It was also a year of learning and adaptation. And it is with gratitude that Nicole can write this story about an amazing man who created not only a legacy for his family but his work-family, too.

On October 12, 2020, what would have been Fred’s 83rd birthday, Lynn retired from the business and started the next chapter of her life. Looking forward to traveling, raising goats and chickens, and dabbling in many crafts, she passed the title of president on to her daughter, Nicole.

The shoes that have come before are unmistakably large to fill. But the pressures of newly owning a business during a pandemic fade out because Nicole holds the company’s core foundation – family – close to her heart. Not only blood family, but the work-family that continues forward on days when it feels nearly impossible to do so. A family to help set goals for the future, but also look back in appreciation of how far they have come.

Through the highs and lows, no matter the buildings occupied, the names on the sign, or the people at the helm, it is comforting to look back on the foundation of STRYKER. This work-family grows every day, honoring the legacy of a man who was never afraid to take chances, and of a woman who led with her heart.

Nicole finds pride in knowing that this company continues to grow and that each person can leave a little piece of themselves to continue STRYKER’s story.